Ahead of the 2018/19 the FA launched a new campaign 'We Only Do Positive' which focuses on the roles of coaches and parents. Over the past 12 months the FA has conducted research into Respect with U7-U16s and across the roles of parents, coaches, match officials and players. This research has shaped the new strategic direction for Respect & how it is communicated within youth football.

As a League, the OYFL supports the FA Respect campaign and the efforts to improve standards of behaviour at grassroots football matches. Matches should be an enjoyable experience for everyone involved, i.e. the players and parents, the club officials and the match officials. Clubs are an important part of this process and we will be working with them to find ways to monitor and improve behaviour on the touchline. Should anyone witnesses behaviour that is not acceptable at a match, the first person to contact is the club welfare officer.

Everyone involved in football has a role in promoting Respect, particularly the following at matches. Please read/download the appropriate code of conduct(s) below and ensure everyone follows them. Clubs should be pro-active in ensuring that their players, team officials, parents and others involved in football follow these codes. Any misconduct will be reported to the appropriate County FA for action.

These play a major role in influencing the behaviour and attitude of players both on and off the pitch. Setting a good example costs nothing, but has a major impact on improving behaviour, increasing involvement and ultimately ensuring the players enjoy their football. On the other side, setting a bad example usually leads to poor behaviour, a drop in involment and often players leaving the sport altogether as they no longer enjoy it. 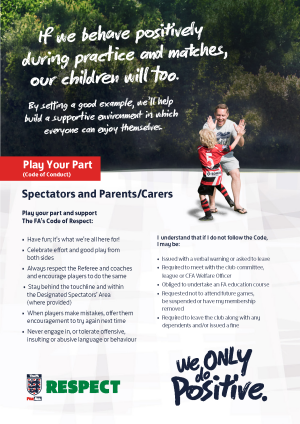 Like coaches, spectators (normally parents/guardians) play an important role in raising standards of behaviour on the pitch. Negative comments coming from the sidelines often impact on players, particularly as most children are trying to impress. The introduction of the respect barrier/designated spectator area has led to an improvement - all matches in the OMYFL must have a respect barrier/designated spectator area. 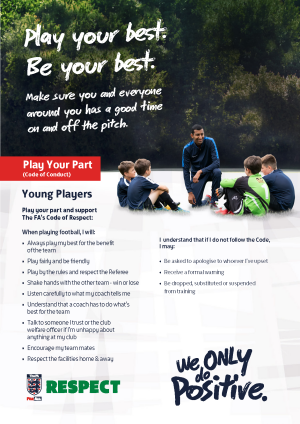 Players must also take responsibility for their behaviour, particularly as they get older. An important role is that of the team captain. He/she becomes the representative of the team and the person with whom the referee will talk during the game. Captains have no specific status or privileges under the Laws of the Game, but they do have a degree of responsibility for the behaviour of their team. To help with this you can download the Guide to Captain's Role . 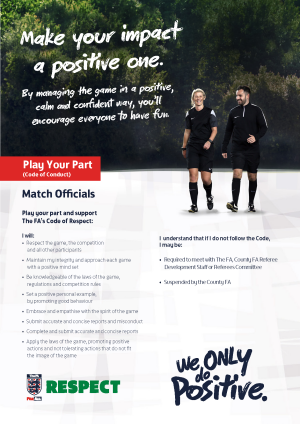 Match officials play a key role within football and without referees, matches would not be able to go ahead and unfortunately many continue to leave the game due natiuonally to harassment, abuse and even assault. Everyone involved in the game needs to support the person in the middle officiating the matches. Remember that they are human and may make errors but their decisions should be respected whatever the outcome of each match.